The culmination of strong academic relations, which have been cultivated between the Russian Presidential Academy of National Economy and Public Administration (RANEPA), one  of Russia's largest universities and the European Public Law Organization (EPLO), during the last five years, is the signing of the Agreement on Wednesday 19 June, 2019 in Moscow for the launching of a Double Degree titled "Law in Global Integration", addressed to Russian and Greek students, as well as to students from all over the world.

The ceremony also honored with their presence, inter alia, members of diplomatic missions of the EPLO member states in Moscow, such as the Portuguese Ambassador P. Viseu Pinheiro, the Azerbaijani Embassy Advisor, Mr. S. Sharifov, the Counselor of the Embassy of Greece Mr. G. Vlahakis, the Consul General of Cyprus, Mr. A. Sammoutis, the Advisor to the Romanian Embassy, C. Laurentiu, and, representing the Eurasian Economic Commission, Mr V. Shakhmatov and Mr D. Soskovets.

The degree will be awarded both by the European Law & Governance School (ELGS) of the EPLO and the RANEPA Law School.

This is an internationally innovative 4-year program, as students are taught modern courses of national, European and international Law and Governance, and are invited to learn (in addition to English and Russian) French or Spanish, or Chinese or Portuguese, and complete their studies with the completion of a dissertation, either at the ELGS or at one of the partner universities in France, Spain, China, Portugal or Russia.

The curriculum and the Double Degree are mutually recognized by the collaborating Institutions. 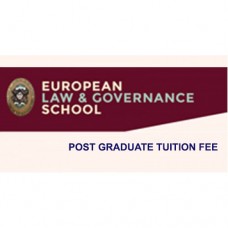 The Postgraduate degrees of the ELGS are one-year taught degree programs followed by one semester of independent research with a thesis requirement, e.. 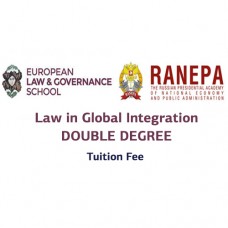 Double Degree Bachelor Program  “Law in global integration with in-depth study of a foreign language (language of the region)"Tuition fee.- .. 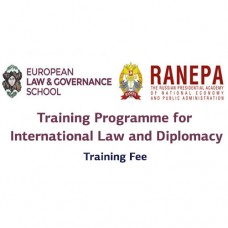 Training Programme for International Law and DiplomacyTraining Fee Cost : 1250 euros.* We strongly recommend that you pay by CREDIT / DEBIT CARD,..